Here we are nearing the end of another year.

And the SJV Water team has been taking stock, reflecting and pondering the accumulation of news and events that made up 2022.

(Really, we’re taking some much needed time off and I’m, personally,  “checkin’ the snow pack” –  code for skiing – and needed to stockpile some content. SHHH!)

Even so, what a year. And what great coverage by SJV Water.

Here’s a sampling of what we covered. Oh and, hint, hint, some of this info may come up in a quiz later.

Who would have thought that one of the first groundwater plans approved out of the gate by the Department of Water Resources would be in Kern County. Just not in the valley portion of Kern.

The Indian Wells Valley is in eastern Kern County, in the high desert and has some very unique challenges.

First, it’s in the desert so it gets very little precipitation. Second, it’s home to one of the largest Naval weapons research and development bases in the United States. Third, since about 2014 pistachio growers have flocked to the area.

It all adds up to a critically overdrafted aquifer without a lot of options.

So, the groundwater authority came up with strict pumping allotments and steep pumping fees designed to cut demand and generate funding to buy water from, where else, the San Joaquin Valley.

How they’ll get the water up there is a whole other story.

Every groundwater plan in the San Joaquin Valley – Every. Single. One. –  got a thumbs down from the state Department of Water Resources after its initial review. Deficiencies ran the gamut including that the plans weren’t protective enough of domestic wells, allowed groundwater tables to drop too low, didn’t say how they would protect water quality and lacked coordination.

The plans were kicked back to local groundwater agencies, which were given six months to fix problems and resubmit them.

Construction to fix the sagging Friant-Kern Canal got underway early in 2022.

The canal, which brings water from Millerton Lake north of Fresno down the east side of the San Joaquin Valley to farms and cities as far away as Arvin, sank in a 33-mile section from Pixley to the Kern County line.

The sinking was caused by farmers overpumping groundwater nearby, which caused the land beneath the canal to collapse.

Funding for the full fix, about $500 million, is still being cobbled together from a variety of sources. Contractors who get water from the canal chipped in, as did the federal and state governments.

As for the farmers who sank the canal, they agreed to pay a share as well. But in July they rejected a land fee that would have paid off their share in a lump sum of $125 million.

Instead they’ll be on the hook for $200 million paid through pumping fees over time.

But questions about how the group is accounting for its groundwater and how much farmers are continuing to pump have raised eyebrows among the Friant group.

Two of the San Joaquin Valley’s biggest growers, J.G. Boswell Farming Company and Sandridge Partners, controlled by John Vidovich, have been going at each other hammer and tong over water.

Vidovich accuses Boswell of selling off its surface water and backfilling with groundwater, causing major subsidence.

The legal wrangling erupted in full public view when Boswell went old school, parking bulldozers on the banks of a canal to keep Vidovich from trenching below it.

Vidovich sued. Boswell sued. Then Vidovich accused Boswell of “buzzing” cattle on his land in retaliation for the lawsuit…and sued.

The entertainment factor fell flat, however, when the feud tanked the region’s groundwater plan.

Vidovich inserted last minute language into one groundwater agency’s chapter of the overall plan. That made the plan “uncoordinated.”

The Department of Water Resources rejected it on that basis, leaving the rest of Kings County’s farmers wondering what’s next.

The fracas did spur passage of a local groundwater protection ordinance that one member of the Board of Supervisors had been trying to pass for more than a decade.

So, how ‘bout that SGMA?

The Sustainable Groundwater Management Act sucked up most of the oxygen in the San Joaquin Valley water world for 2022 as agencies grappled with how best to implement the measure, which aims to bring aquifers into balance by 2040.

Madera County was ground zero for all the issues of SGMA.

Farmers in Madera’s  white areas (outside of water district boundaries) felt shafted by pumping limits that didn’t affect their neighbors.

They didn’t trust how water use was being measured, they marched on Sacramento and they banded together to stop fees from being implemented.

Now, the county, which is tasked with managing the aquifer for white areas, is left with a lot of project ideas to bring more water to the basin but no money to do it.

Meanwhile, a groundwater agency in Fresno county said the state’s requirement that all domestic wells be protected was “unreasonable,” sparking concern of state intervention.

In Tulare County, farmers were handed their own pumping caps and fees.

And in Kern County, water districts started splintering off from the main Kern Groundwater Authority, largely because they feared the state’s dim view of the Semitropic Water Storage District’s take on SGMA.

In some cases, the plan would allow farmers to pump the water table down by more than 350 feet from where it is today.

Other water districts didn’t think that would fly with the state and have been scurrying to create their own groundwater agencies and plans in hopes of being seen as “good guys.”

Though SGMA has been promoted as an “all for one” approach to groundwater, there is a clause that allows the state Water Resources Control Board to exclude districts that are acting in good faith from punitive actions incurred by bad actors.

And this thing is just gettin’ started.

No water, no work

In all the SGMA drama, very few people have asked about a very real, and concerning consequence – what about the farmworkers?

Estimates are that more than one million acres of productive land will have to be fallowed in the Central Valley to bring aquifers into balance.

That land, and all the fruits, vegetables, grains, meat and milk it produces, means jobs to thousands of farmworkers.

What happens to them?

Not a lot of answers so far.

There is a new dam proposed for the Central Valley that has funding, environmental approval and got passed its first legal hurdle in 2022.

Some of its most ardent critics are other Central Valley irrigators. How can that be? Welcome to the wacky world of California water rights.

Back in the 1930s when the federal government built the Central Valley Project, it took San Joaquin River water and sent it south through the Friant-Kern Canal. It promised existing river users that it would provide water from the Sacramento-San Joaquin Delta in “exchange” for the river water they were giving up.

Thus was born the San Joaquin River Exchange Contractors, who have some of the best water rights in the state by virtue of those federal contracts. Even in extreme drought, the feds have to deliver water – even if that means shorting or completely stiffing the Friant contractors.

Now the Exchange Contractors want to build a dam in the Del Puerto Canyon, in the mountains west of Patterson.

That’s all well and good, except, the Friant contractors are worried if the Exchange Contractors store their federal water in the reservoir – which they intend to do per the project’s environmental documents – they could still call on Friant water in dry years.

A judge dismissed those and other concerns in a late 2022 ruling on the project.

Friant is weighing its appeal options.

It was another ugly year under severe drought conditions.

Even emergency responders were close to tapped out.

State help was spotty, at best.

On the bright side, if you had water to sell, it was like printing money.

By April, even agricultural water was going for $2,000 an acre foot.

Law of the river

The Kern River has been making water lawyers rich since the 1870s.

Who owns its waters? 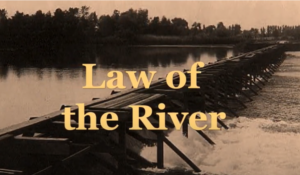 How does it operate?

Why is the river bed dry, while adjacent canals are brimming?

What are the state hearings on the river all about?

SJV Water began its yearlong quest to explore all these issues and more in a series of short (mostly short) videos called “Law of the River.”

And now there’s a new lawsuit on the river that accuses the City of Bakersfield of being derelict in its operation of the river.

Specifically, it asks the city to study how operations have harmed “the public trust.”

Changing of the guard

Their No. 1 task was ridding the district of longtime general manager Tom Birmingham. He resigned shortly after the new board was elected.

The new board says it wants to seek collaborative and innovative solutions to the sprawling district’s water needs rather than solely focusing on legislation and litigation.

In Kern County, a new board member was elected to the Kern County Water Agency even though he said he was dropping out of the race. 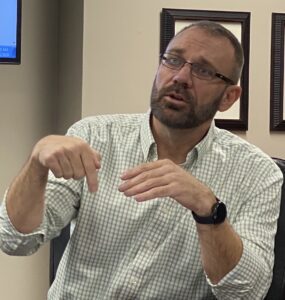 Averett is a well-known water manager in the area who now works for a private water broker called Homer, which is one of numerous connected LLCs that buys, sells, stores and moves water in the valley.

As soon as Averett filed papers to run, concerns popped up about whether his work with Homer would create too many conflicts of interest for him to be an effective board member.

He previously said the agency’s conflict protocol would suffice.

But he hasn’t answered any questions since his victory.

Visit Site
PrevPreviousDesert groundwater agency mulls how to get water from San Joaquin Valley
NextPOP QUIZ: How closely have you been reading SJV Water???Next