For some Kern County farmers, overpumping groundwater could get pricey

Farmers in the sprawling Semitropic Water Storage District in the northwest corner of Kern County got a look recently at possible water charges for going over their allotted water budgets and the top amounts were eye popping.

The details are still being worked out and won’t be put in place for a while, said Semitropic General Manager Jason Gianquinto. But the goal is to create a sharp financial disincentive to keep growers from significantly overshooting their water budgets.

Depending on which tiered pricing structure the district ends up adopting, farmers could pay more than $1,600 per acre foot for going over budget by as much as 10% or as little as 2% to 4%.

That may seem extreme, but so is Semitropic’s groundwater picture. Its average annual overdraft is 165,000 acre feet, more than half of the total Kern subbasin overdraft of about 324,300 acre feet per year.

Semitropic has to get its share of the aquifer into balance by 2040, per the state’s Sustainable Groundwater Management Act. To get there, the district is hoping to reduce pumping by implementing water budgets – and holding farmers to them.

“That higher tier is tied to a landowner who is perpetually over budget where we would need a permanent solution,” Gianquinto said. Setting the price at $1,600 per acre foot reflects what it would cost the district to buy and fallow land or buy a permanent supply of water to make up for that landowner’s overuse. Lower tier costs under consideration are $321 and $595 per acre foot.

Though the water prices are of note, Gianquinto said the larger discussion at Semitropic right now is how to set the tiers, which is a delicate balance. If the lower tier is set too low and numerous landowners go over budget, that creates a larger water deficit for the district and doesn’t bring in as much money to buy supplies. But setting the lower tiers too high could be overly punitive.

The district will have time to sort out its tier pricing as this is the first year growers are operating under water budgets, which are set at 4.20 acre feet per acre.

Though that amount struck some water managers as pretty rich, it isn’t all pumped water, Gianquinto said.

Each parcel in the district can receive a variety of different types of water depending on what land owners choose to buy. Those can include State Water Project, other purchased supplies and banked water.

So, each parcel within Semitropic was given a specially tailored water budget. Included in that budget is also a temporary groundwater allotment that will be reduced to zero by 2040, Gianquinto explained.

How much of the 4.20-acre-foot budget is made up of the temporary allotment depends on the other water sources for that parcel. If a parcel gets 2.25 acre feet of State Water Project water, .27 acre feet of other water purchased by the district and .50 acre feet of native yield (groundwater), its temporary groundwater allotment would be 1.18 acre feet for one water budget year, according to an example in Semitropic’s groundwater sustainability plan.

In succeeding years, that temporary allotment amount would shrink. 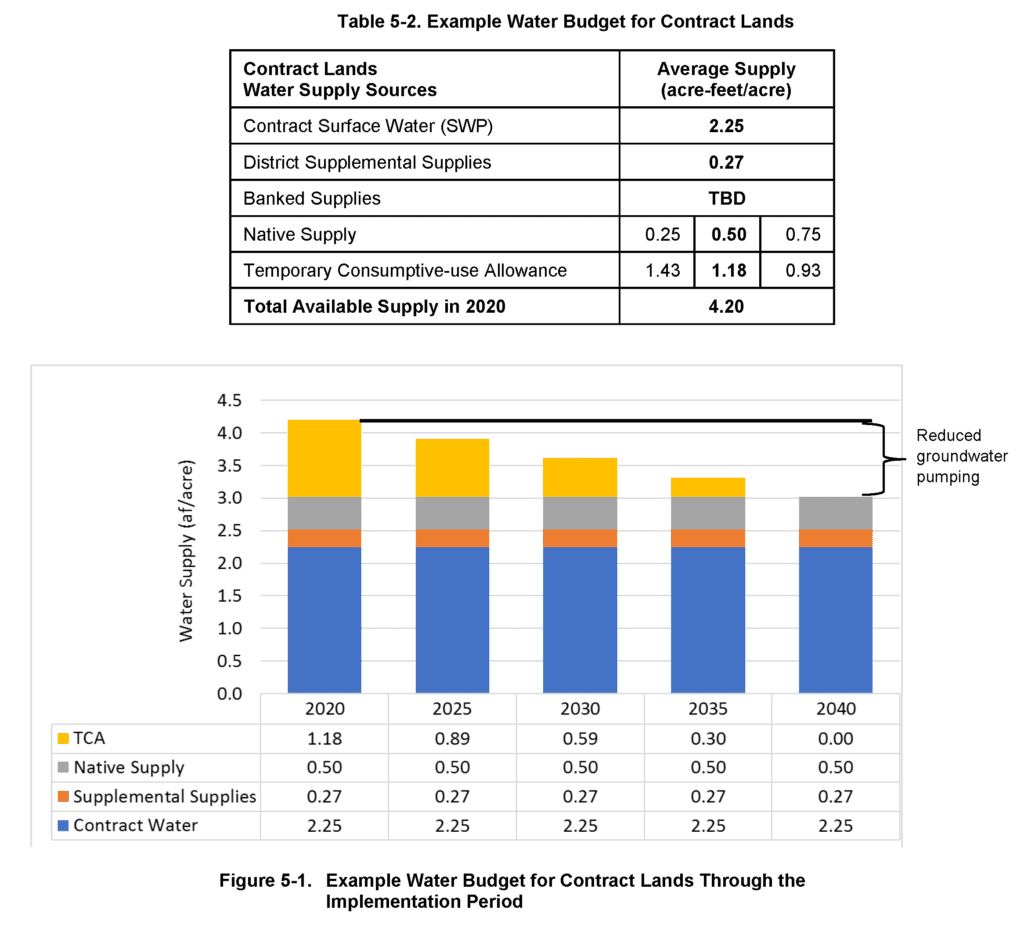 The goal of the water budgets is to reduce district demand by 3,000 acre feet a year up to 60,000 acre feet by 2040 while giving growers options for how best to proceed, according to Semitropic’s groundwater sustainability plan.

“They know where they stand and they know what to plan for.”

Part of that demand reduction will include a district-led land fallowing program. But that appears to be moving slowly, according to an October presentation by Semitropic. One slide from the district shows the amount of irrigated acreage dropped 3,571 acres from 2015 to 2020.

Most of that decrease, however, appears to have been in lands dedicated to duck clubs. Irrigated acres, according to the slide, only decreased by 168 acres over those five years.