In the often hard-fought world of archeological preservation, Colin Rambo is counting the McAllister Ranch groundwater project plan as a “win, win, win.”

Rambo, an archeologist with the Tejon Tribe, has been working closely with the City of Bakersfield and the two Kern County water districts behind the project to make sure the “significant” Native American sites on the ranch are protected.

Most importantly, a process has been agreed to where any human remains found will be properly attended to and reburied on the site.

“Usually, it’s not that way,” Rambo said. “Usually, we’d be moving the bones to a tribal cemetery. Any time we can keep a burial in place, it’s the best win a tribe can hope for.”

He said a tribal monitor will follow all digging equipment on site and watch for artifacts or remains. The monitors have been trained and can perform the proper rituals for respectful reburial.

And that is a possibility at this site, which he said may have been a Yokuts village.

“There are lots of theories about what the site was used for,” he said. “There is a theory that this was a cremation processing area where people would bring their deceased relatives to be prepared and cremated by a Shaman. But that’s a minority theory.”

It’s more likely, he said, that this was a small village and people who died were buried beneath their homes, which were then burned.

“One family would have three or four homes in different locations and would travel between them,” he explained. The homes were conical huts made of tule rushes and ringed with rocks. “They didn’t have horses, so transporting a body over a long distance would have been really hard.”

In order to accommodate potential archeological sites, the groundwater project was reduced in size and slightly redesigned, Rambo said.

Tim Ashlock, General Manager of Buena Vista Water Storage District, a proponent of the project, said the tribe’s concerns have been understood throughout the process.

“What they wanted was reasonable and we were happy to do it,” he said. 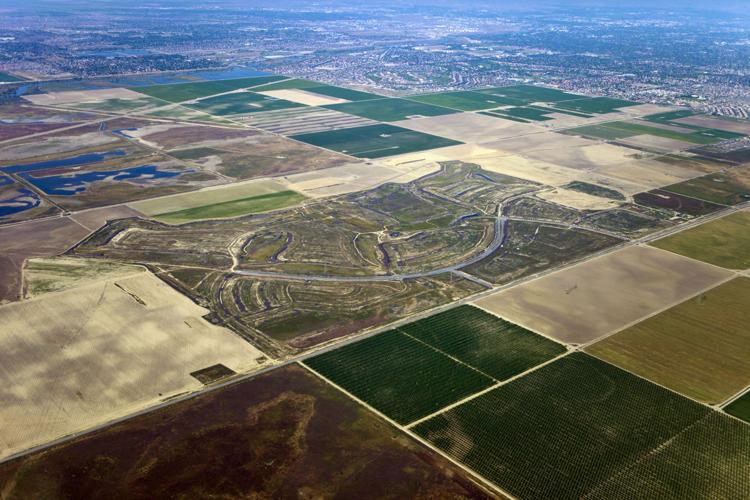 The path to this outcome hasn’t always been easy.

When the draft environmental impact report on the project is released later this spring, it will have been more than a decade since the ranch went from a proposed housing development to a water project.

McAllister Ranch, a 2,100 acre plot of land that was once at the far southwestern fringes of Bakersfield, was set to become a 6,000-home “elite” subdivision with a Greg Norman designed golf course before the housing crash of 2008.

In the project’s earliest days, the County of Kern had jurisdiction over the land and the Tejon tribe hadn’t yet been federally recognized.

“Significant Native American sites had been discovered,” Rambo said. “But no tribal governments were working on it. There were some members of the local Native American Heritage Commission involved. Then the plug got pulled on the golf course and the housing market crashed.”

Roads had been graded and the golf course clubhouse partially built, but otherwise the land sat vacant for years, a symbol of the wreckage left by the “Great Recession.”

In 2011, Buena Vista and Rosedale-Rio Bravo water storage districts bought it out of foreclosure for $22 million and set about planning a massive groundwater recharge facility. The City of Bakersfield, which had annexed the area, wasn’t keen on having percolation ponds cover what it had anticipated would be a large tax-generating housing development for which it had already developed a wastewater treatment facility.

The city insisted on taking over as the lead environmental agency but the water districts, both public agencies that typically do their own environmental reports, refused. The city sued and the water project was stalled. An agreement was eventually reached for the city to lead the environmental review and a draft report is expected out this spring.

While all that was playing out, years went by and the property became a dumping ground and “massive amounts of unauthorized OHV use has caused significant damage” to the Native sites, Rambo said.

Dan Bartel, General Manager of Rosedale-Rio Bravo Water Storage District, said the water district fixes fences routinely and hauls hundreds of tons of trash out monthly, but without regular use of the massive property, it’s difficult to keep people out.

Now that the environmental review is finally about to get underway, he predicted “we’ll have a nice tidy groundwater facility out there soon.”

Once complete, he said, it will be capable of recharging up to 200,000 acre feet of water a year.