The prospect of being sent to California’s “groundwater cop” strikes dread in the hearts of most water managers.

But for John Vidovich, having the Tulare Lake subbasin come under the glare of the State Water Resources Control Board may be the only way to end an irrigation practice by the J.G. Boswell Company that he says is wasteful, abusive and contributing to the sinking of an entire town.

Boswell, which has not responded to requests for comment, pumps large amounts of groundwater into massive shallow ponds for later irrigation, something Vidovich, who runs Sandridge Partners, has complained about for years.

“I think this practice is going to be referred to the state Water Board,” Vidovich said in a recent interview. “I’m assuming this practice will be the focus of the state water board.

It’s not clear what the Water Board would consider should the subbasin come under its watch. But it seems that’s where the subbasin is headed, possibly as soon as the end of summer.

The Department of Water Resources is already sifting through revamped groundwater sustainability plans filed by groundwater agencies in late July. This is DWR’s second look at the plans, first submitted in 2020 under the Sustainable Groundwater Management Act, which aims to bring severely depleted aquifers into balance by 2040.

If the plans aren’t up to snuff on this go round, the department could stamp them inadequate and turn the subbasin over to the Water Board – SGMA’s enforcement arm.

One of the possible failings for a groundwater plan is lack of coordination among groundwater agencies in the same subbasin. If agencies have different plans, that’s a fail.

In the case of the Tulare Lake subbasin, which covers most of Kings County, the five groundwater agencies submitted a single plan.

Except at the last minute, the Southwest Kings Groundwater Sustainability Agency, controlled byVidovich, voted  on July 22 to add a paragraph saying the GSAs would work “to prevent the inefficient storage of groundwater in shallow basins.”

The other four GSAs didn’t include that paragraph. 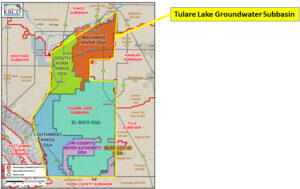 “Adding that language makes it a different plan,” said Paul Gosselin, Deputy Director of SGMA with DWR. If that’s the case, he said, DWR could find the plan “incomplete” and begin consultation with the Water Board.

At least one other area GSA thinks that step is imminent.

“I had a call with Paul Gosselin this afternoon,” Jeof Wyrick wrote to the other GSAs in an email a few days after the Southwest Kings GSA vote. “We will be placed into incomplete status at the first possible minute.”

Wyrick is a Boswell vice president and chair of the El Rico GSA, which covers Boswell lands in Kings County.

If the Water Board takes over, it could put the subbasin into “probationary” status, which would allow the state to potentially impose its own groundwater pumping plan and attach fees of $300 per well and $40 per acre foot.

All of this was well understood when Vidovich pushed for the paragraph about groundwater storage.

“The process that was set up under SGMA is if we don’t all agree, then it goes to the state Water Board,” Vidovich said. “I believe we’re 100% in agreement with everything except this one practice.”

But there’s no guarantee where Water Board intervention would end if it were to take charge of the subbasin, something Wyrick alluded to in an earlier email.

The Southwest Kings GSA sent out the new paragraph about groundwater storage a few days before its vote seeking to have the same paragraph adopted by the other GSAs.

Responses were not favorable.

“This is not acceptable at this late date,” Wyrick wrote in a July 19 email. “Mr. Vidovich tried to wreck three subbasins (Kern, Tule and Tulare Lake) at the last minute in 2020. Now he tries again. DWR does not appreciate his antics.

“Mr Vidovich trying to bring his spurious claims into the document will not be adopted by El Rico. He has pending litigation, and the courts will decide. The alternative is to do a re-write to point out all the illegal movement of water that Mr Vidovich is doing. However, we leave this to the courts.”

“There is no feud”

The ongoing water war between the two ag giants was cited by another GSA director who added that the paragraph on groundwater storage was unclear and overly broad.

“Given the open animosity between Mr. Vidovich and Boswell over the last couple years, it is impossible to not view this as an extension of that well documented conflict,” wrote Dennis Mills, director of the Mid-Kings River GSA.

Vidovich insisted there is no beef, at least not on his side. He blamed SJV Water’s coverage of the various legal cases between Boswell and Sandridge for state officials dismissing what he says are legitimate groundwater concerns as a personal spat.

“You keep characterizing it as feud. And that’s worked well for Boswell,” he said. “The political people at the state don’t want to be perceived as getting involved in a personal feud.”

But he said this is strictly about groundwater for him. Too much pumping in the region has been documented as the culprit for land sinking beneath the town of Corcoran. And Sandridge has had to pay millions, Vidovich said, to install lift stations to move water through canals that previously ran on gravity.

“It’s not normal pumping,” he said of Boswell’s operation.

Other farmers in the region are reticent to get between to two largest growers in the county.

But Doug Verboon, a walnut farmer and member of the Kings County Board of Supervisors, said neither entity should be moving groundwater out of the county or using it to excess.

“And another name needs to be mentioned in all this and that’s Wonderful,” he said, noting that the mega farming operation owned by Los Angeles billionaire Stewart Resnick is the likely buyer of water being sold out of Kings County.

“He farms ground with no natural groundwater so when the state cut back (Sacramento-San Joaquin) Delta exports, he had no choice but to pay to take our water,” Verboon said.

When the state cut exports, he said, it forced growers to increase groundwater pumping. More than that, it made groundwater a commodity as opposed to the backup supply it had always been, he said. Now the state needs to do something to protect the region’s groundwater.

“With Boswell and Vidovich fighting like this, we’re all going to pay the price.”