Kern River “restoration” wells pumping but not to restore the river

The Kern County Water Agency used $11.2 million of the $23 million it got from Proposition 13 to buy a high-flow right on the Kern River back in 2000.

It is known as the Hacienda right and had been owned by the Nickel Family LLC. The agency bought a right to the water, which materializes about every five years or so when the Kern River is running significantly above normal.

Aside from the $11.2 million, the Nickel family also got a guaranteed 10,000 acre feet a year and permission to use the agency’s access to the California Aqueduct and other conveyance facilities to move that water around to different buyers. And there have been plenty.

The agency gets a 10% cut of whatever sales the Nickels make each year.

So far, that’s worked well for both entities.

Since 2001, the agency has made nearly $12 million off the Nickel water sales.

One of those buyers was the Tejon Ranch Company, which acquired rights to the water in 2016, ostensibly for use in one or more of its planned housing developments.

While those are waiting to get off the ground, Tejon has turned around and sold the Nickel water at a solid profit every year.

According to its 2022 third quarter earnings report, Tejon paid $861 an acre foot for the Nickel water and sold it for a little more than $1,400 an acre foot, turning a nearly $4.7 million profit.

An observant reader emailed SJV Water recently asking about a well he noticed near Calloway Drive that was pumping water into the brimful Cross Valley Canal just north of the dry Kern River “all summer long and beyond.”

He wondered if that was a well owned by the City of Bakersfield and, if so, where that water was going considering lakes in city parks were going dry.

That is not a city well. But it has a long, somewhat convoluted history with the city, as well as the Kern River.

That well noticed by the reader is one of a half dozen wells, originally known as the “Kern River Restoration wells,” (later referred to as the Parkway wells) sandwiched between the river and the Cross Valley Canal from Calloway Drive to Allen Road that were built using Proposition 13 money in 2002 to great fanfare as a means to put minimum flows in the river through town.

To quickly answer the reader’s question, those wells are owned and operated by the Kern County Water Agency.

The reader was right, the Parkway wells have been pumping a lot of water – about 24,000 acre feet through November, according to the agency.

Most of the water has been needed to supply Oildale and east Bakersfield homes and businesses through the agency’s drinking water division, called Improvement District 4 (ID4), as drought severely cut ID4’s surface supplies from the state.

Indeed, state water allocations were down to just 5% this year.

At the same time, however, ID4 also sold water to agricultural water districts this year for nearly $10 million.

The fact that wells built with public funds to restore the Kern River are now being used by a public agency to backfill municipal water even though it has surplus water to sell did not sit well with river advocate Kelly Damian, a spokesperson for Bring Back the Kern. The group, along with several other public interest organizations, is suing the City of Bakersfield for dewatering the river.

“This is yet another example of the people’s benefit being railroaded in favor of industry,” she said of how the Parkway wells are being used. “Driving past those wells is a very visual symbol of the attitude that those in charge have taken toward the river and the citizens. Water is only here to make money and the will of the citizens and needs of the city be damned.”

On a positive note, she said the Parkway wells do show how the river could be restored through town and supply ag and municipal needs at the same time.

“We really could have both,” Damian said in reference to how the wells, the river and the Cross Valley Canal could be used to move water.

The Parkway wells were built as part of the “Kern River Restoration and Water Supply Program,” spearheaded 22 years ago by the Kern County Water Agency with support from the City of Bakersfield.

The wells were supposed to have been instrumental in re-establishing a minimal flow in the river from Manor Street to Allen Road, through “the heart of the City of Bakersfield,” according to the agency’s environmental documents that authorized construction of the six wells.

They were paid for using public funding from Proposition 13, a $2 billion water bond passed by California voters in 2000.

The plan, according to agency documents, was to use the wells to pump groundwater into the river bed in dry years, defined as when Kern River runoff is at 50% of normal or below. The plan also mentions having two agricultural water districts run water in the river, then using the Parkway wells to pump water into the Cross Valley Canal to deliver it back to them “during the driest of years.”

The agency even vowed to provide up to 35,000 acre feet of water annually “in order to help maintain the flow for recreational, community and environmental benefits to the citizens of Metropolitan Bakersfield.”

The aim was to have a minimum flow of 60 cubic feet per second in the riverbed particularly from May through September “without decreasing supplies that are needed during the critical water short years,” according to the agency’s documents.

Public funding on board

Though some hailed the plan as a means to recreate the Kern River, others were more skeptical.

“It was entered into with taxpayer money with no way to make it sustainable,” recalled Rich O’Neil, an original founder of the Kern River Parkway Foundation, who has been advocating for a flowing river for decades. “It made no sense. Why suck the water up from beneath the river, to put it in the riverbed?”

Even so, the plan netted the agency $23 million of Proposition 13 funding. The biggest chunk of that money, $11.2 million, went to purchase the Hacienda river right, or very high-flow Kern River water, as well as the ability to use storage space in Lake Isabella.

A much smaller slice of that public funding was used to build the Parkway wells.

Back in 2002, the agency told The Bakersfield Californian, it used $3 million to build the six Parkway wells. However, according to agency responses to questions about the wells this fall, the amount reported to the insurer of the construction bond in 2002 was only $844,287 for the six wells. A request for more information, including audits or reports sent to the state showing how the Proposition 13 money was spent, is still pending.

Regardless of the cost, the Parkway wells have never been used to create or maintain flows in the Kern River, nor to return ag district water that was run in the river for recreational flows.

Shortly after the wells were completed in 2002, the agency and city disagreed over who should pay the power bill to pump the water, a cost of about $1 million a year. The city said it didn’t have the money and the agency said its funding was for building the wells, not running them.

So, the project that was supposed to ensure a flowing river, never got underway.

Instead, in 2007, the agency filed an addendum to its original 2000 Kern River Restoration environmental documents unilaterally changing the Parkway wells’ purpose from providing flows for the river to providing water for ID4.

Per that addendum, those wells are now able to pump up to 44,000 acre feet of “previously banked” groundwater a year for delivery to the agency’s Henry C. Garnett water purification plant and, ultimately, the taps and toilets of homes in Oildale and east Bakersfield.

“What banked groundwater accounts did ID4 plan to extract from using the (Parkway) wells?” the city asked in a 2007 letter to the agency.

It objected again in a 2009 letter to the agency that states the wells were being used without proof of water having been spread in the area to justify the pumping.

“We request that you cease pumping the wells immediately,” the letter states.

“It comes up every drought,” said Bakersfield Councilman Bob Smith, who chairs the City of Bakersfield Water Board that oversees the city Water Resources Department. “And the agency always says it’s pumping water that was previously stored.”

Tracking how much water ID4 has banked for use by the Parkway wells is tricky. 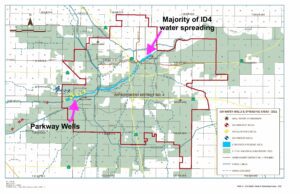 About 70,000 acre feet have been spread west of Highway 204, according to city records.

Meanwhile, ID4 has pumped nearly 100,000 acre feet from the Parkway wells in that time, according to agency records.

At the same time ID4 has been pumping the Parkway wells to make up for decreased surface supplies this year, it also, apparently had enough water socked away in the Kern Water Bank to sell to ag districts in western Kern County, according to agency records.

It sold 6,500 acre feet for $9.9 million this year. The lion’s share went to the Lost Hills, Belridge and Berrenda Mesa water districts in western Kern County. About 45 acre feet was sold for $1,500 an acre foot to the Tehachapi-Cummings County Water District.

That money was used “as a rate stabilization measure for ID4 purveyors,” according to the agency. Pumping all that water during repeated, severe droughts increased ID4’s operational costs. The water sales helped cover those increases, the agency wrote in response to questions.

“It just seems like we’re working against ourselves,” he said. “It’s disheartening.”