You probably didn’t notice a twin-engine prop plane loaded with high-tech equipment circling 23,000 feet over the San Joaquin Valley’s upper watersheds this fall. But it was there, gathering information about those watersheds in their “snow off” condition.

That detailed information will be vital to multiple follow up flights of Airborne Snow Observatories, Inc. (ASO) this winter as snow accumulates in the highest reaches of the Sierra Nevada.

This is the first year the Department of Water Resources (DWR) has funded flights for nearly all the state’s watersheds, 12,  at a cost of about $10 million to $11 million.

And this is the first year the 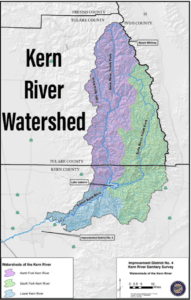 Kern River watershed will be examined using ASO’s mix of LIDAR and imaging spectrometry that can measure snow depth to within two inches, according to ASO information.

“There have been a lot of blind spots,” Rizzardo said. With ASO data, he said, water managers will know not just how much snow there is, but the characteristics of that snow, including its water content.

That gives a much clearer picture of what to expect during spring runoff begins. Of course, nature can always throw a loop with unusually hot weather or warm storms, Rizzardo noted.

Still, the ASO information is crucial so water managers can either hold more water back in reservoirs in times of drought or alert downstream users to prepare for more releases out of reservoirs if it floods.

With these additional ASO flights, DWR will have its snow/runoff forecasting program built out to about 1/3 of the full scope it hopes to attain, Rizzardo said.

Staffers would like to see ASO flights over all of California’s 18 major watersheds and include atmospheric research models to keep tabs on conditions year round.

Before ASO, the state and other snow watchers relied on gages and snow sensors, which only give a snapshot of a very small dot in watersheds that cover hundreds of square miles.

Though water managers in the Kings, Kaweah, Tule and San Joaquin river watersheds had been paying for a smattering of ASO flights themselves over the past four or five years, Kern water managers were  more skeptical of how beneficial the pricey flights would be, according to former Kern River Watermaster Dana Munn.

Each watershed requires a snow off flight and then several flights through winter and spring. Each flight, with attendant modeling and data crunching, is estimated to cost about $90,000.

Now that the state is paying the full cost, Kern water managers are very interested in the data, but still skeptical.

“The forecasting models are getting better,” wrote current Kern River Watermaster Mark Mulkay in an email. “The Kern River interests are cautiously watching the process.”

With the state, not locals, in charge of the project, Kern River rights holders are in a “wait and see” mode, Mulkay wrote.

ASO will conduct three flights over the Kern River watershed this winter and spring, all paid for by DWR.

“We’re seeing runoff patterns we haven’t seen before and the old tools are just not as effective,” he said “We need sophisticated tools like this where modeling is based on physics, not statistical analysis. There’s a big difference.”