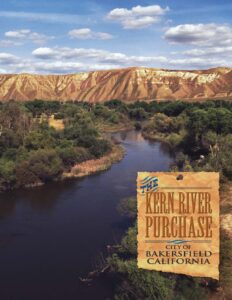 Attorney Scott Kuney, who worked with Williams at North Kern Water Storage District, remembered Williams as a “man of great faith, integrity and a consensus maker.

“And he was fun,” Kuney said Friday. “He had a thousand stories.”

Kuney recalled driving up the Kern River Canyon for a meeting and Williams, at the wheel and speaking with his hands, got too close to the canyon wall, ripping open a tire.

“So, there we were changing the tire at the side of the canyon and he still finished the story. He didn’t miss a beat.”

Kuney said Williams was a quintessential family man who was devoted to “and truly in love with” both his wives, his first having died of an illness.

“And he was so thoughtful,” Kuney said, recalling how Williams brought over a gift when Kuney and his wife had their first child. “It was a stuffed animal and it was known as ‘Chucky’ from day one.”

Williams was very “personal and thoughtful” and loved sugar, Kuney said. So much so, that when Williams visited Kuney, he would stop by the coffee room, grab some sugar cubes and “…have a sugar cube in his mouth and one in is hand and stand in my doorway and chew the sugar cubes and chat about whatever we needed to talk about,” Kuney said. “He was the most brilliant engineer I ever worked with.”

Williams came to Kern in the 1960s after obtaining an engineering degree from Stanford University and went to work for the big dog in water locally, the Kern County Land Company.

He stayed on for several years after the Land Company sold to Tenneco West then went to work as the Engineer Manager for North Kern Water Storage District.

After the City of Bakersfield bought Tenneco West’s rights to the Kern River in 1976, the preceding Kern River Watermaster, Tenneco employee Bill Balch who had served since 1955, stepped down.

The Army Corps of Engineers, which built Isabella Dam in 1953, required the multiple, and warring, river interests, to appoint one person as a liaison to coordinate water releases with the Corps. Whoever that would be had to understand dam and river operations as well as the intricate set of river rights, known as the “law of the river.”

The Kern River interests (Bakersfield, the Kern Delta Water District, Buena Vista and North Kern water storage districts and the Kern County Water Agency) were, and are, a suspicious group. They didn’t (and still don’t) trust many people to adhere to river rights in an unbiased manner.

The all agreed, though, that Williams was the man for the job.

Though almost everyone trusted Williams, they still only allowed him to be named “acting, interim” Watermaster when he took on the job in 1976, according to a 2013 interview with Gene Bogart, Bakersfield’s former water resources director who worked with Williams at Tenneco West in the 1960s.

It took 20 years for the river interests to go ahead and name Williams the actual Kern River Watermaster, at Bogart’s insistence: “I made a damn motion to knock that off. It was silly,” he said in the 2013 interview.

He remained the Watermaster until 2014, largely because the river interests, again, couldn’t agree on a replacement.

“I suppose when I’m pushing up daisies, then they’ll have to make a decision,” Williams joked in a 2013 interview about how long he had served as Watermaster.

Eventually, the river groups agreed to appoint Dana Munn, former Engineer Manager of North Kern and General Manager of Shafter Wasco Irrigation District, in 2014. By then, Williams had had the “interim” job of Kern River Watermaster for 37 years and was 86 years old.

Munn kept the job until April of 2021 when he retried for medical reasons and Mark Mulkay, former General Manager of Kern Delta Water District, took over later that same year.

“When I got the initial list of employees at North Kern there was a guy name Williams with an employment start date the same year as my wife’s birth year –1956!” Diamond texted. “So, Chuck had 51 years on the river when I showed up 2007!”

Both Munn and Diamond said Williams would be greatly missed.

Funeral arrangements for Williams are pending.