The tiny community of Tooleville on the edge of the valley floor in Tulare County is finally beginning the process of getting clean drinking water from the nearby City of Exeter.

So, there are definitely signs of progress for the impoverished, two-road community of 340.

But both processes will take years. And after decades of talk about clean drinking water with little to no action, Tooleville residents have grown skeptical.

People don’t believe Exeter will consolidate with Tooleville because it’s been on the table for so many years, said Olivera, who has lived in Tooleville since 1974.

For nearly 20 years residents and advocates of Tooleville have pushed for consolidation but Exeter city officials steadfastly refused. The two wells that serve Tooleville are decrepit and the groundwater they draw  is contaminated with hexavalent chromium, a heavy metal that can occur naturally and through improper industrial site disposal. The state has provided bottled drinking water for Tooleville since 2014.

Then in August of 2021, the state forced Exeter to consolidate after Tooleville’s wells nearly went dry during the drought.

The consolidation process has finally started, but it’s slow going.

“We’re still working on trying to get the answers we need to start getting a better feel for it,” said Adam Ennis, city administrator for the City of Exeter.

Ennis said city staff are still waiting for an ongoing feasibility study to wrap up. The study was funded by the state and is analyzing the condition of infrastructure in Tooleville and Exeter and what water rates would look like for Tooleville residents.

Already, there have been a handful of needed improvements identified, said Ennis. Some piping in Exeter is in bad shape. It’s estimated that Exeter will need two new wells to accommodate Tooleville’s 77 connections. And officials don’t know where those wells would be drilled. The city has an existing six wells that serve 2,983 residential and 283 commercial connections, according to California Drinking Water Watch.

The improvements needed to consolidate with Tooleville, so far, come to about $15 million, said Ennis. 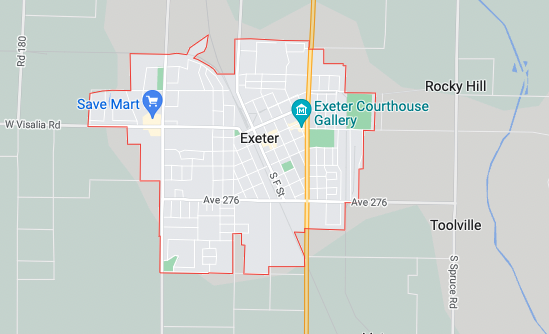 Paying that bill is yet another challenge. Exeter ratepayers can’t pay for the project because it doesn’t benefit them, said Ennis. He is waiting to see if the state will foot the bill once the costs are finalized.

“It’s not going to do any good for Exeter and Tooleville to go into an agreement that neither one of us can afford,” said Ennis.

City staff are working on developing a timeline and milestones for the project. It will likely take a few years or more until the connection is completed, said Ennis.

In the meantime, maintenance crews have been working to rehabilitate Tooleville’s wells.

Staff at Visalia-based nonprofit Self-Help Enterprises applied for a state emergency drought grant in July of 2021. A few months after that, a grant of a little more than $100,000 was approved to pay for well rehabilitation and two emergency water storage tanks for Tooleville.

The tanks were put in over summer but it took until March of 2022 for the well rehabilitation to start because well drilling companies were overloaded with work and booked for months in advance.

Once workers finally got to the wells in March, they cleaned out the wells and replaced parts that were too old and not working properly. During the process, pieces of old well casings came up out of the ground.

The wells are, “definitely at the end of their useful life,” said Andi Galdamez, community development specialist with Self-Help Enterprises.

As of April 8, workers were almost finished rehabbing both wells.

At around the same time well rehabilitation began, the state Water Resources Control Board announced it had determined 10 parts per billion as a proposed maximum contaminant level (MCL) for hexavalent chromium.

That’s the same number the state had previously set until it was forced to do away with the regulation because of an improper economic impact analysis.

Galdamez was relieved at the announcement.

“I was dying to see that number,” she said.

Even though Tooleville will be taken off their groundwater supply once the consolidation process is complete, Galdamez said the progress on a new MCL is still important for the community and other small towns like it.

Over the years, Tooleville’s wells have been significantly over the proposed MCL, ranging up to 14 parts per billion.

But similarly to the consolidation, it will probably take years before the MCL is officially recognized. The state estimates the MCL will go into effect in early 2024.