Water debt has ballooned to nearly double what it was last year in Cantua Creek and El Porvenir, two small towns in western Fresno County where nearly half the residents live in poverty.

The towns were supposed to be getting water from two new wells by now but the project hasn’t been completed so they’ve continued to rely on expensive surface water.

Fresno County buys about 100 acre feet of water each year for the towns from Westlands Water District at $432 per acre foot. During the 2012-2016 drought, water costs soared to more than $1,400 an acre foot.

The water then has to go through a costly treatment. Even then, it’s not considered safe to drink. The State Water Resources Control Board has been providing bottled drinking water to residents since 2015. 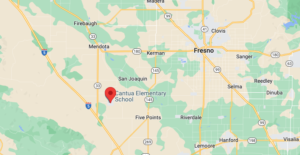 Residents already pay a lot for their water, in some cases up to $190 per month, but it’s not enough for the expensive surface water and treatment.

So, Fresno County covers the gap. The longer it’s taken for the new wells to come online, the more that debt has grown.

Cantua Creek and El Porvenir are County Service Areas, special districts governed by the Fresno County Board of Supervisors. Residents pay into a fund for some basic services, such as water, which the county then administers.

It was hoped that with the two new wells, residents could switch to groundwater, which is cheaper as the only cost is power to pump up the water and maintenance on the wells. It’s also hoped the water will be good enough that it won’t need expensive treatment.

Funding for the wells and new distribution system, a nearly $14 million project, came from the State Water Resources Control Board. The board also chipped in $100,000 between 2014 and 2018 to help repay what the towns owe Fresno County.

But the debt has continued to mount.

Now, the wells can’t come online until a rate study is done and new rates are set to determine how much residents will have to pay each month for the system, including  power, maintenance and any treatment, Bump said.

Residents voted down a water rate hike back in 2015. But Bump is hoping rates for the new well system will be subsidized through the state’s Safe and Affordable Drinking Water Program.

“We’re expecting or hoping for state funding that would assist with subsidizing the rate,” said Bump. “I can’t say that that’s confirmed because we don’t actually have a funding agreement. But that is kind of the hope and expectation.”

The state legislature tried to create a new water rate assistance program to help small towns mired in debt, such as Cantua Creek and El Porvenir. The bill passed the legislature but was ultimately vetoed by Gov. Newsom on September 28. Gov. Newsom cited the $1 billion that already went to the state Water Board to pay water bill debt and pointed to the fact that the proposed program would have no funding source.