The fight against climate change is coming to the small town of Allensworth in Tulare County.

The state awarded $300,000 to the Allensworth Progressive Association, a local nonprofit, to “implement neighborhood-level projects that reduce greenhouse gas emissions, improve public health and the environment and expand economic opportunity for residents,” according to a press release from the Governor’s office. 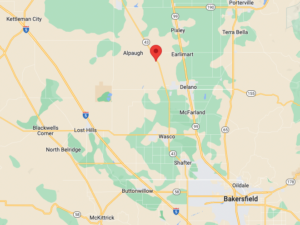 The money will be used, in part, for planning flood control and infrastructure for wastewater management.

“Personally, I was shocked,” said Dezaraye Bagalayos, director of program coordination for the association, about receiving the grant. The grant process was difficult and intimidating, said Bagalayos. But Allensworth had enough expertise to get through it, she added.

“We really minimized our expectations,” said Bagalayos. “So, we were all very, very pleasantly surprised.”

Funding comes from the state’s Transformative Climate Communities program, which awarded $96 million to 10 disadvantaged communities throughout the state last month. The projects aim to reduce greenhouse gas emissions by 64,000 metric tons, according to the press release.

Allensworth – founded in 1908 by Colonel Allen Allensworth, a former slave – is the site of a historic park and monument. The town sits atop an aquifer laced with arsenic. Residents get water from two community wells which are both in bad condition.

A new $3.8 million dollar state funded well is being built, but has been stalled repeatedly since 2014.

In the meantime, UC Berkeley has partnered with Allensworth community leaders to test arsenic removal technology. Ashok Gadgil, leader of the Berkeley project, applied for funding from the National Alliance for Water Innovation which would pay for a two-year arsenic removal pilot project in Allensworth. The decision on that funding will be announced in early 2023, wrote Gadgil in an email.

For the newest state funding, flood control planning is a focus, said Bagalayos.

“In the future, it’s going to be drought or flood,” said Bagalayos. “We are highly susceptible to both.”

Planners need to analyze the topography in Allensworth, where water will naturally flow and where flood mitigation makes the most sense, said Bagalayos.

The whole community is on septic, which can also cause major issues during flooding. Bagalayos said community leaders are looking into a regional wastewater treatment plant project to begin addressing the shortcomings of septic.

Working together with other small communities nearby is also part of the plan, said Bagalayos.

“We want to share all the things that we’re doing,” said Bagalayos. “We want to figure this out with our neighbors because we know that’ll make all of our efforts that much stronger.”