Some parks get water, others dead fish – it’s all tied up in drought and Kern River history

What city residents now know as Truxtun lakes – which prompted outrage when they dried up leaving a bunch of fish to die and rot – were originally a much larger holding pond for the Carrier Canal.

When Truxtun Avenue was extended to Coffee Road in the late 1980s, it cut the holding pond in half and cut its access to the canal water. But former City Water Resources Manager Gene Bogart thought the lakes would be a nice amenity for the public so had a pipe installed under Truxtun to keep them full.

For a time, the island in the main lake was dubbed “Bogart Island,” at least among city staffers.

Since then, the lakes have remained mostly full, even during the worst of the last drought in 2015. This year, though, the city started with much less water stored in Lake Isabella, said Water Resources Manager Art Chianello. And growth has created more demand.

“We have to prioritize water for our drinking water plants,” he said of the decision to cut water from the Carrier Canal into Truxtun lakes. In 2015, the city supplied 283 acre feet to the Truxtun Lakes, which got low but didn’t go dry. This year, the city put 431 acre feet into the lakes, but it wasn’t enough to withstand the intense dryness built up over the last two years, according to Water Department staff.

Interestingly, it was the Carrier Canal, in part, that prompted the city to buy rights to the Kern River.

The partially concrete-lined Carrier Canal takes water off the river at the base of the bluffs north of Bakersfield College and runs west along the south side of the river delivering water to several other canals.

The Carrier was enlarged in the 1960s by the Kern County Land Company and used to deliver river water subject to the 1888 Miller-Haggin Agreement.

That agreement requires 1/3 of the river’s flow from March 1 to August 31 be delivered to the Buena Vista Water Storage District “undiminished.” That means the full amount, without any water subtracted for seepage into the ground.

In the 1970s, with more water being diverted into the Carrier and other agricultural canals, the river ran dry more often than before.

City leaders suddenly found Bakersfield in a water deficit and asked “Where has our water gone?” according to the “Kern River Purchase” booklet.

That question eventually led the city to buy out Tenneco West’s Kern River water rights for $17.9 million in 1976. 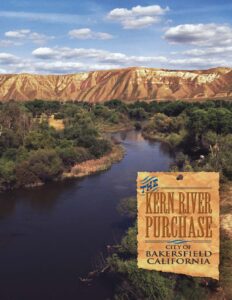 The drying lakes at the Park at River Walk and along Truxtun Avenue have stirred a lot of controversy over the impact to wildlife but also over what people see as a lopsided division of pain during this very painful drought.

Why are City of Bakersfield water features going dry while lakes, a golf course and parks owned by Kern County are still lush?

And those are what’s governing which lakes get water and which go belly up, so to speak.

As SJV Water reported back in July, the City of Bakersfield cut off water to Truxtun lakes and the lakes at River Walk in order to keep every drop available for drinking water.

With the Kern River running at just 20% of normal this year, that doesn’t leave a lot for “extras,” such as water features in parks. But when the city cut water to those amenities it left a stinky fish die-off at Truxtun lakes that caught the public’s ire and attention, even getting a mention in Newsweek.

Many pointed to full lakes in other parks and wanted to know: How come!?

It all goes back to the Kern River and the age-old system of “first in time, first in right.”

When the city bought rights to the Kern River in 1976 from farming company Tenneco West, it inherited all of the contracts and obligations Tenneco already had on the books.

As long as there’s enough water flowing in the river, those contracts have to be honored.

One of those contracts was inked back in 1934 between Kern County and Miller & Lux Inc., and the Kern County Land Company (which later sold to Tenneco West) to fill two lakes and irrigate the grounds at the regional Hart Memorial Park east of town. The lakes are operated as a pass through, meaning the water flows into the lakes and back out into the river.

No money changes hands and the pass-through has minimal effect on the river’s flows.

This is another old contract going back to 1964 between the county and the Pioneer Canal Company, which was the entity that did business for the Kern County Land Company.

It states the canal company will provide enough water each year – not to exceed 790 acre feet  – to make up for evaporation out of Lake Ming and keep it full.

That was changed in 2016 by then City Manager Alan Tandy who was said to be furious with the county after it refused to pull water from its minimum pool supply in Lake Isabella and bring it down the river to keep the northeast treatment plant operating.

Instead, California Water Services, which owns the plant, had to do some quick deals with the Kern Delta Water District to keep water flowing to the plant and some 20,000 city residents.

After that, Tandy bumped the price for the Lake Ming water from $6 to $81 per acre foot, plus an annual adjustment for inflation.  The county is currently paying $102 per acre foot ($80,580 a year), Kern County Administrator Ryan Alsop wrote in an email.

And, according to Geoffrey Hill, Chief of the county’s General Services Department, Lake Ming also has a riparian right to some river water by virtue of the fact that the land is adjacent to the river.

“We also sustain a recreational pool in this lake and have the riparian rights for this use,” he wrote in an email.

The golf course may also have a riparian right, which would allow it to take supplies directly off the river with or without the city’s permission.

“Yes, we did have that discussion with the county,” said Assistant City Manager Gary Hallen, about the county’s rights. “They did say they have documentation as to their rights but they haven’t provided that yet. We have asked them to send the documentation.”

Meanwhile, he said the city asked county staffers to “brown up” the golf course a little by reducing irrigation.

Alsop said that’s already in motion and provided a list of conservation measures at the course, including using moisture sensors, no irrigation before and after rain and and reducing water on “areas of non play.”

In 1998, when CalWater built the northeast treatment plant, which relies on city water from the river, it needed space for settling ponds and other equipment.

Kern County provided that land and, in exchange, the city allows it to use river water to irrigate the soccer fields along Alfred Harrell Highway as well as some water for the California Living Museum (CALM).

No city water supplies are used to fill the two county-owned lakes (Evans and Webb) at the Buena Vista Aquatic Recreational Area near Taft, according to Hill and Alsop.

The lakes were built for recreation and agricultural water storage under a contract with the state. Because the project affected the Buena Vista Water Storage District and Henry Miller Water District, the county entered into separate contracts in 1971 with those districts allowing them to store and move water through the lakes.

The county is obligated to keep the lakes at a certain level and uses groundwater pumped from six wells to maintain that minimum pool, according to Hill.