The usually sleepy race for the Kern County Water Agency board of directors perked up this month after a challenger filed papers to run for the Division 4 seat.

Cerro, a longtime area farmer, has served on the board since being being appointed in 2016 to fill a vacant position and previously served 19 years on the Kern Delta Water District board.

Since 2021, Averett has helmed the water division of Homer LLC, a private company that’s part of a large network of other companies that have been amassing water rights and developing private water projects, among other things, throughout California since the early 2000s. Prior to working for Homer, Averett was the General Manager of Rosedale-Rio Bravo Water Storage District for 13 years.

Averett is well known in local water circles for innovative projects, though not all have met with universal praise.

Rosedale’s current Onyx Ranch project, which proposes to bring water from the South Fork of the Kern River above Lake Isabella to farms northwest of Bakersfield, was spearheaded by Averett. In fact, Rosedale bought the Onyx Ranch in 2013 from RENU Resources LLC, one of dozens of companies associated with Homer.

That Onyx project, though, has met with significant resistance from Kern River rights holders, which sued recently over its environmental impact report. The Kern County Water Agency is among those suing.

Cerro said he was not a fan of the Onyx Ranch project.

“I don’t have a problem with creative deals as long as they are bringing water into Kern County and keeping it here,” Cerro said

Enhancing Kern’s water supplies is Cerro’s No. 1 focus as a director, he added.

For his part, Averett said he’s running for the seat to put his 30 years of water experience to work helping the agency meet coming water challenges.

“My big desire is I want to make sure Kern County’s interests are represented,” he said. “Locally and at the state level.”

He said he would bring unique experiences to the board having worked at the agency in its domestic water division, then for an agricultural water district and now in the private sector.

Should he win, Averett said, he didn’t feel his work for Homer would interfere as the agency has protocols for directors to avoid conflicts of interest.

The Kern County Water Agency is one of the most powerful water boards in Kern and, as the second largest contractor for State Water Project water, it wields a lot of clout statewide as well.

When questions arise about how to finance massive water infrastructure projects, such as the proposed Sacramento-San Joaquin Delta tunnel, state regulators take the pulse of two entities: the Metropolitan Water District of Southern California and the Kern County Water Agency.

Locally, the agency provides wholesale supplies to water purveyors serving large sections of east Bakersfield. It owns rights to high flow water on the Kern River. It is one of six entities that control the massive Kern Water Bank.  And it is one of three members that govern the Kern River Groundwater Sustainability Agency, which monitors water tables and can set pumping limits.

The agency also controls the movement of significant amounts of water into and out of the county through its Cross Valley Canal, which can move water east and west from the California Aqueduct, connecting to numerous other canals all the way to central Bakersfield.

The agency is partially funded through property taxes, which is why agency board members are elected by all voters in their Divisions.

In the case of Division 4, that includes voters across the entire southwest corner of Kern, from Highways 58 and 99 all the way to the county line.

Because of that, Averett will have an uphill battle as incumbents are often favored in more obscure races.

In the few past contested elections, challengers seeking to unseat incumbent agency directors have had to work hard to get their names in front of voters, using mailers and lots of campaign signs. 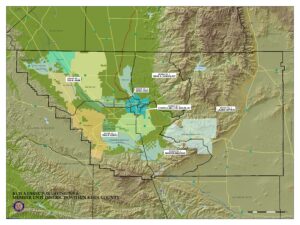