Longtime family farmer Laura Cattani was appointed to the board of the powerful Kern County Water Agency during a special meeting on Monday.

She is the second woman to serve on the board of directors in the 60-year history of the agency.

Cattani will bring much needed diversity to the board, several directors said during Monday’s meeting, not only because she’s a woman, but also for her age. Cattani is 39.

“I’m the youngest member of this board and I’m 64,” noted Board President Royce Fast.

“I really think we need some diversity on this board,” Milobar said. “And I really like that Laura is directly involved in farming and water use. And as much as the Cattani family farms, they probably use all the kinds of water the county has.”

Each “type” of water comes with its own web of rules and regulations.

The Kern County Water Agency administers the contract for water from the State Water Project on behalf of 13 local agricultural water districts and helps foster exchanges with the federal project as well. It also owns high flow rights to the Kern River and supplies drinking water to a large chunk of Bakersfield’s population through its Improvement District No. 4.

“I have a lot to learn,” Cattani said. “But I do know a lot about water from the farming and ranching perspective.”

Though the agency is involved in almost every facet of water, Cattani said she believes the “delta conveyance,” or tunnel, out of the Sacramento-San Joaquin Delta will likely be a large focus for her and the agency going forward.

“Of course, there’s SGMA (the Sustainable Groundwater Management Act) which is huge,” she said. SGMA mandates that areas with severely depleted groundwater bring their aquifers into balance by 2040. The Kern subbasin is considered critically overdrafted.

Cattani, who also serves on the Bakersfield Museum of Art and Bakersfield Marathon boards, is also excited about working with the education programs provided by the agency.

She will represent Division 2, which covers a huge swath of eastern Kern County from the Kern River Valley out to Ridgecrest and down the desert to the Tehachapi area.

Water issues in each of those areas are unique and complex, including Lake Isabella Dam construction, a proposed “energy storage” reservoir on the upper Kern River and groundwater issues in the Indian Wells Valley among others.

The vote to appoint Cattani was 4-2, with Director Gene Lundquist and Fast voting no as they had favored the other candidate, Jack Rudnick, also from a well-known local ranching family.

“I’m voting no, but I’ll be very happy with Laura as the representative for Division 2,” Fast said, noting the board was lucky to have had two very strong candidates.

Cattani has a deep connection to water in Kern County as her grandfather, Jack Thomson, served as one of the first directors for the agency from 1962-1982.  During his 21 years of service, Thomson served as Board President three times. Thomson died this past Feb. 24 at the age of 98.

Cattani will fill the remainder of the 2021-2025 term of Bruce Hafenfeld, who died Jan. 19 after a battle with cancer. Hafenfeld, a longtime rancher in the Kern River Valley, had been on the board since 2012.

Though her first meeting won’t be until March 25, Cattani is already looking to the future and considering running for the seat when this term ends.

“Hopefully I can help secure water for Kern County. The future of Kern and Kern farming depend on water.”

Cattani follows in the footsteps of Adrienne Matthews, the first woman on the agency board, who served from 1986 to 2015. 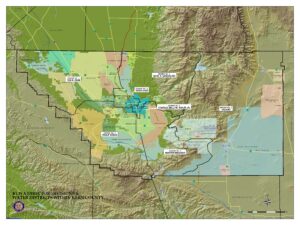