Monsoonal rains in early August offered a brief moment of relief to some San Joaquin Valley watersheds. But the dousing of rain did not make a dent in the ongoing drought, according to water managers.

“It helped a couple of the Kern River interests with flow that they weren’t anticipating,” said Mark Mulkay, Kern River watermaster. “We’re falling back down now.”

The Kern River watershed probably saw an increase of a couple thousand acre feet, said Mulkay. That offered some water users a bump of surface water and the ability to turn off wells, he added. The monsoon water lasted for about 10 days, said Mulkay.

Summer monsoonal rains are a regular part of the California climate and can come with fierce impacts. In other areas of the state, such as Death Valley National Park, the monsoon rains caused flash floods and mudslides, damaging roads and stranding cars.

“It’s kind of always a little bit of a boost when it hits but it’s one of those things that we never, never count on,” Mulkay said. “In a year like this, every bit helps.” 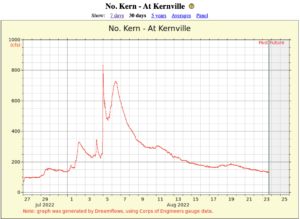 California is in its third year of severe drought. Surface water allocations throughout the state have been slashed for water users prompting a reliance on pumping groundwater. That, in turn, has caused the further decline of aquifer levels which were already critically overdrafted in the San Joaquin Valley.

While the monsoon rains spiked supplies in some watersheds, others saw little to no impacts.

The Kaweah River, which flows into Lake Kaweah east of Visalia, saw a spike of inflow around August 6. Flows went from about 100 cubic feet per second (cfs) to nearly 250 cfs. But the effects disappeared fast. The flow dropped back down within two days and the river has seen, “nothing of significance,” from the rains, according to Mark Larsen, general manager for the Kaweah Delta Water Conservation District. 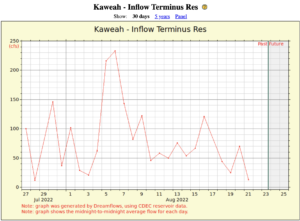 The Kings and Tule rivers similarly saw a one- or two-day increase in flows in early August, according to the Dreamflows website, which tracks daily river flows.

Friant Water Authority, which operates the Friant-Kern Canal and Friant Dam in the San Joaquin River watershed east of Fresno, fared a bit better. In mid-August, the rains led to an additional 30,000 acre feet in Friant’s water year forecast which goes through September, said Ian Buck-Macleod, water resource manager for the authority. But that hasn’t resulted in any change to Friant’s surface water allocation so far.

Friant is at a 30% allocation, said Buck-Macleod. That’s up from its initial 15% allocation in February. Buck-Macleod estimates the monsoonal rains made room for another 5% increase, or about 40,000 acre feet of water.

But the Bureau of Reclamation, the agency in charge of Friant’s water, hasn’t increased the allocation and is unlikely to, said Buck-Macleod. That’s because the monsoonal rains helped “meet the assumption,” of the 30% allocation, he said. The rain shored up the current allocation, Buck-Macleod added.

“I understand where they landed,” said Buck-Macleod. “They’re not going to increase our allocation unless something drastically changes.”

The monsoon rains have helped with soil moisture deficit and will probably improve base flows and runoff in the fall.

Strangely enough though, Friant is in a position where having too much water down the road is a cause for concern.

The 152-mile Friant-Kern Canal brings water from Millerton Lake east of Fresno to farms and towns as far south as Arvin. Because of overpumping of groundwater, parts of the canal have sunk, crimping the canal’s carrying capacity by up to 50%.

Repairs to the canal have begun and that means some areas won’t be able to receive water during construction. From mid-November to January, repairs will cause an outage for parts of Friant’s service area.

If the authority receives a late bump in its allocation, a “big portion” of its districts won’t be able to accept that water, said Buck-Mackleod. On top of that, Millerton Lake is relatively small in comparison to the watershed. So, Friant managers are trying to make room in the lake.

“We want to draw it as low as we can heading into the next season,” Buck-Macleod said.

Regardless of the complexities, water users are not likely going to see a change in what’s available.

“We think we should have seen an increase in allocation,” he said. “Reclamation is just being more conservative.”