A report completed in March 2019 and released Dec. 31 by the Department of Water Resources shows the effect of agricultural groundwater pumping on subsidence beneath the California Acqueduct.

CLICK HERE for the report. (Patience needed! It takes a while to load.)

Heavy groundwater pumping to sustain a massive increase in orchards and vineyards in the San Joaquin Valley has brought the state’s main water artery to the brink of permanent damage, according to report released by the Department of Water Resources Dec. 31.

If groundwater pumping near the California Aqueduct continues at current levels through the next, inevitable drought, the land will sink further potentially resulting in “non-recoverable compaction and permanent land subsidence,” reducing the Aqueduct’s ability to deliver water, according to the report.

The most severe choke points appear to be at the southern end of the giant Westlands Water District east of Coalinga in Fresno County and in Kern County east of Lost Hills. The land has already sunk in those areas up to 6 and 4 feet, respectively.

Those choke points are already causing a “significant decrease” in the Aqueduct’s carrying capacity and could impede the system’s ability to deliver water in as few as three years if pumping isn’t curtailed, according to the report.

This is a supplemental report to a DWR study in 2017 on subsidence under the Aqueduct, which supplies water to more than 25 million people from the San Joaquin Valley to southern California.

The 2017 study prompted the state to consider groundwater pumping restrictions near the giant canal along Interstate 5. At the time, however, state officials said they needed to study the areas around the worst subsidence before mandating pumping restrictions.

This supplemental report is that follow up. It studied the effects of thousands of wells and land uses within a 10-mile corridor along the 440-mile long Aqueduct from Merced to Kern counties.

Subsidence at the main choke point near Coalinga, Pool 20, increased rapidly in the late 2000s and early 2010s, which coincides with a dramatic increase in permanent crops in the study area.

“Over the past several decades there has been a 10-fold increase in land planted in orchards and vineyards within the section of the Aqueduct study corridor that passes through western Fresno County, an area of well-documented historic land subsidence,” the report states. “Land planted in orchards and vineyards also has increased by a factor of four in western Kings and Kern counties, including parts of known subsidence bowls traversed by the Aqueduct.”

The report looked at the percentage of land in the Aqueduct study corridor planted in permanent crops starting in the late 1980s:

As surface supplies from the Sacramento-San Joaquin Delta dwindled starting in the 1990s, the increased “hardened” water demand of all those permanent crops was met with groundwater from deep wells. The report blamed those deep wells, drilled below the Corcoran clay layer or 200-800 feet below the surface, for causing rapid subsidence and at least some permanent aquifer damage.

The report comes at a crucial time as Groundwater Sustainability Agencies throughout the valley prepare to submit their first groundwater sustainability plans to the state per the Sustainable Groundwater Management Act. Those plans are due Jan. 31.

DWR has already reached out to GSAs in subsidence areas near the Aqueduct  to make sure their groundwater plans address this issue.

The hope is “to collaboratively resolve impacts through the SGMA process as a preferred solution, while considering what steps are ultimately necessary for protecting State Water Project facilities,” a DWR spokeswoman wrote in an email.

The timing and conclusions of DWR’s Aqueduct report have caused some observers to wonder if the state is possibly looking to identify funding sources to pay for subsidence damage. Growers that farm near the most severe choke points include some of the largest and wealthiest in the state, such as Wonderful and Boswell.

DWR was noncommittal on that issue: “While SWP has a long-standing practice of notifying and on rare occasions litigating parties who cause harm to the Aqueduct, SWP has not filed litigation at this time,” the spokeswoman wrote.

She said a study looking at how much it will cost to fix the Aqueduct subsidence is underway and numbers should be available in the next two years.

That report could be eye opening as well.

By comparison, fixing a 33-mile stretch of subsidence on the Friant-Kern Canal is estimated to cost between $200 million and $700 million.

The section of the Aqueduct suffering subsidence is four times longer than the Friant-Kern Canal. 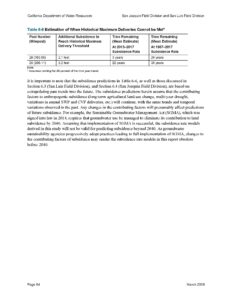 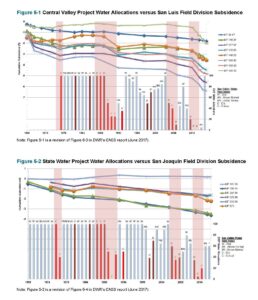 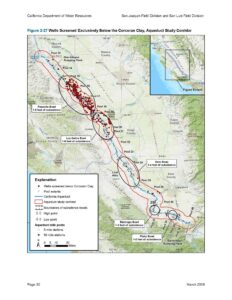 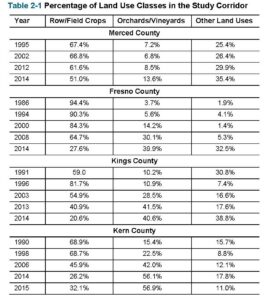