The long quest for clean drinking water in the small town of Allensworth has been beset by all manner of challenges – arsenic, a thicket of government red tape, lack of funding and even a protected lizard.

Now, after 14 years of wrangling (including having a special bill passed), as residents are finally on the cusp of getting a new well, drought is causing fresh worries.

The well project is plowing forward, though, and come September, construction could get underway.

“Everybody here in Allensworth is frustrated with how long it’s been taking and how they feel the county and the state view Allensworth,” said Sherry Hunter, president of Allensworth Community Services District (CSD).

Her hope for the future is tempered by years of what she feels has been neglect by state officials who’ve left Allensworth to fend for itself.

Allensworth – founded in 1908 by Colonel Allen Allensworth, a former slave – is the site of a historic park and monument.

It also sits atop an aquifer laced with arsenic. Residents get water from two community wells a few miles away. But those wells are in bad shape. They are both old and dilapidated and one produces water with arsenic above state limits. That water has to be blended with clean water before it gets to residents’ taps.

The town is home to about 500-600 now mostly Latino residents.

And it’s growing, or trying to, Hunter said. Farmworkers in search of affordable housing would like to settle in Allensworth, which is tucked into the pastoral southwest corner of Tulare County, surrounded by open land. 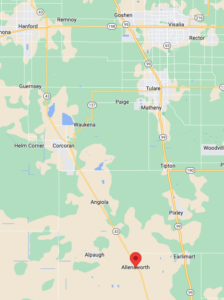 “We have too many people to put onto that system not knowing what’s going to be the straw that breaks the camel’s back,” said Hunter.

The new well, which water district staff first began applying for in 2008, is needed more than ever.

“One thing or another”

Jessi Snyder, director of community services for Visalia-based nonprofit Self-Help Enterprises, helped with that first application. She recalls the long history and many stutter steps Allensworth has taken toward clean drinking water.

“We worked with Allensworth for decades on one thing or another,” said Snyder.

In 2008, the funding program was with the state Department of Public Health which wasn’t “particularly quick,” said Snyder. It wasn’t until 2013 that the state funded a grant for $390,000 to start the planning phase for the new well.

Planning for the well started in 2014 and took four years to complete.

“It was really, really hard to find land,” said Snyder. “And that was a major barrier.”

A usable site was finally located near the current wells and a test well was drilled. Even though the current wells have arsenic, it’s the best site for reliable water under the maximum allowed level of arsenic in the area, according to project hydrogeologists, said Snyder.

“We still have a couple of snags,” said Snyder.

One of those snags is the blunt-nosed leopard lizard. It’s a protected species endemic to the San Joaquin Valley and it has been found at the well site.

Because of the lizard’s protection status, there was no legal pathway for the California Department of Fish and Wildlife to allow for the well construction.

Clearing that hurdle fell largely on Allensworth community members. Hunter traveled to Sacramento multiple times over the years along with other residents to plead their case to lawmakers.

In 2018, the Legislature passed a bill allowing the Department of Fish and Wildlife to permit the Allensworth well.

But the permit had to be done under the California Environmental Quality Act, a process that took three years, wrapping up in July 2021. The Fish and Wildlife permit fee of $34,000 is still outstanding.

Because the project grants are done through reimbursements, Snyder said staff members are still trying to figure out how to pay the fee.

Fish and Wildlife has, “no concerns” about the project, said Annee Ferranti, Environmental Program Manager for Fish and Wildlife, in an email. The department “was in support of the project because the new well, storage, and distribution system upgrades are needed for public health and safety of the residents of Allensworth.”

And now the drought

Add to those complications a delay in getting an engineer under contract and staff turnover at Self-Help Enterprises and, “it just all stacks up,” said Snyder. “It was an urgent situation. And it’s not really been treated that way. It’s just kind of clawed its way through the funding process. And it just takes forever.”

“Frustration isn’t even the word,” said Hunter. “Nobody cared about Allensworth.” Despite the yearslong process, Hunter still has hope the well will solve much of the drinking water struggle in Allensworth. But she worries that even after the well is built, drought could render it useless.

“Is there enough water there that will sustain this community?” said Hunter. “That’s a very big concern of ours.”

In drought years, farmers throughout the valley turn to pumping groundwater for crops. That draws down aquifers and poses a problem for drinking water wells which are often shallower than surrounding ag wells.

The new well in Allensworth will be less than 300 feet deep. The arsenic contamination is too high at deeper levels.

“There’s definitely concern,” said Snyder. “We don’t understand the exact construction of the strata in the aquifer well enough to make super accurate predictions about impacts between wells.”

In the summer of 2021, wells throughout the valley went dry including community wells such as the one in Teviston, about 12 miles northeast of Allensworth, which prompted a drinking water crisis.

If all goes smoothly, construction will begin in September and will likely take about six months.

Throughout the 14-year process, Hunter said she has been inspired by her mother who moved to Allensworth in 1977 and was not the type of person to give up, she said.