Bakersfield brewers send suds with a message to State Water Board

Bakersfield raised a brew, literally, to the State Water Resources Control Board on Friday in honor of the Kern River.

An iced down package of seven locally made craft beers was delivered to board members as part of the latest outreach effort by Bring Back the Kern, a local group advocating for water to flow through Bakersfield in the Kern River.

“Our goal was to raise awareness,” said Miguel Rodriguez, committee member of Bring Back the Kern. “There are so many people that don’t think twice that the Kern River is dry.” 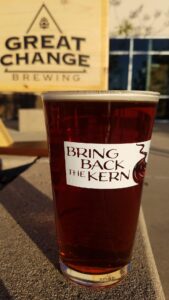 etched with a winding river and the words, “Bring Back the Kern.” It is the latest chapter of a multi-pronged campaign by Bring Back the Kern to pressure the Water Board to get water flowing in the now dry river.

In 2010, the Water Board ruled there was unappropriated water on the Kern River. But it didn’t specify who would get the water or how much was available. Since then, six entities have applied for the water, including the City of Bakersfield, which pledged to run the water in the Kern River through Bakersfield and restore some of the dry sections.

Bring Back the Kern has been pushing the Water Board to side with Bakersfield. Friday’s beer delivery was another reminder of that effort.

“This consensus between our 7 breweries is emblematic of the unity our community feels towards the Kern River,” Bring Back the Kern wrote in an email to Water Board members. “We want to see it flow again.”

Rodriguez said he and his colleagues thought the package would send a hard-hitting  message and show that an entire community stood behind their campaign.

For some of the breweries, the mission is personal.

“I’ve been frustrated about the dry river most of my life,” said Don Bynum, president and co-founder of Temblor Brewing Company. “If there’s a movement I can get behind, it’s this.”

For Evan Morgan, director of marketing for Crusader Brewing Company, the collaboration was more about community participation than anything. He said Crusader didn’t participate for political reasons.

“It’s really going to show that our community is progressing in some ways,” said Morgan. “It’s not just honky tonks and Bud Light anymore.”