As the summer grinds on, farms, towns and a critical native salmon restoration program that all rely on water from Millerton Lake near Fresno continue to hope their water won’t be needed to fulfill irrigation contracts further up the San Joaquin Valley.

But in this parched year, nothing is certain.

If water is required out of Millerton, which happened in drought years 2014 and 2015, that could be especially detrimental for the San Joaquin River Restoration Program, which is already taking unprecedented steps to nurture its endangered spring run Chinook salmon population.

“It’s not the best conditions, but we will survive this,” said Don Portz, director of the San Joaquin River Restoration Program. “Hopefully there aren’t that many 100-plus-degrees left this summer and we’ll have enough cool water left in Millerton for the fall.”

The program announced  in early June it would halt San Joaquin River flows in order to save enough cool water in Millerton to help the salmon during their spawning phase from mid-September through October. The program has about 144 salmon in the 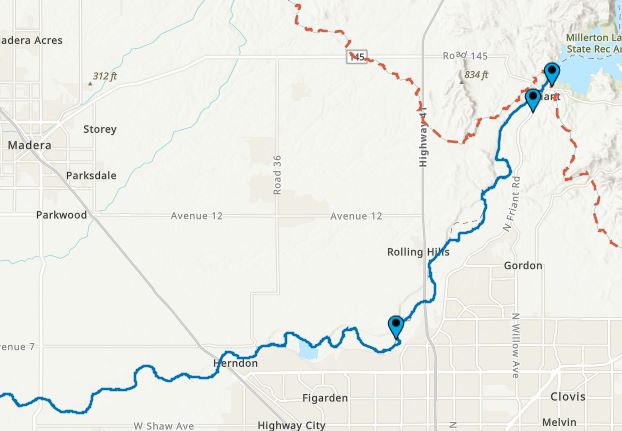 where they are sitting out the summer.

The plan is to begin releasing cool water from Millerton starting Sept. 9 and keep it flowing through the salmon’s spawning and crucial emergent phases. Then the program would put enough water down the river starting in mid-November to reconnect it to the confluence with the Merced River and help the young salmon migrate out to the ocean.

Not only would increased river releases diminish the cold water pool, they could affect where the fish build their redds, or egg nests. In higher flows, the salmon build redds in the gravel higher up on the river banks. If those flows then drop back down, it would leave the redds exposed.

“So we would have to come back in with more water to keep those redds wet,” Portz said. The restoration program is looking at a number of possibilities, or river release “curves,” to prepare for whatever comes next. It’s keeping a day-by-day watch.

Ironically, cool water for salmon is behind the potential call by Exchange Contractors on Millerton water.

Exchange Contractor water comes from Lake Shasta through the Sacramento-San Joaquin Delta and is delivered by the Delta-Mendota Canal on the west side of the valley. With Shasta is so low this year, very little water is being released in order to keep it cool enough for endangered winter run Chinook salmon.

Exchange Contractors are owed 650,000 acre feet this year under their contract with the federal Bureau of Reclamation. It’s hoped they can be supplied by moving and trading water through the State Water Project system, said Ian Buck-Macleod, Water Resources Manager for the Friant Water Authority, which operates the Friant-Kern Canal bringing water from Millerton to farms and towns all the way to Arvin on the valley’s east side.

“We are optimistic it will work out,” said  Buck-MacLeod. Right now, Friant contractors are receiving 20% of their contracted amount and Buck-MacLeod said that’s the goal through the end of this water year.

The stakes are high for Friant contractors who received zero water allocations in 2014 and 2015 when Exchange Contractors made a call on Millerton water. The Exchange Contractors did sell some water back to Friant users at $240 per acre foot in 2014. In 2015, they sold 10,000 acre feet to Friant for $1,000 per acre foot, according to Eric Quinley, general manager of Delano-Earlimart Irrigation District who was with the Friant Water Authority in 2015.

“It was the biggest check I’d ever seen,” Quinley said of the $10 million Friant Water Authority paid to the Exchange Contractors. “But that water was critical in keeping untold numbers of acres of permanent plantings alive that year.”

Chris White, Executive Director of the San Joaquin River Exchange Contractors Water Authority, did not return a call for this story but has previously said landowners in Exchange Contractor districts are fallowing land and pumping more groundwater this year to reduce their demand on the delta. The Exchange Contractor deal was created back in the 1930s when landowners with rights to San Joaquin River water allowed the federal government to send their water to farms and towns on the east side of the valley in “exchange” for water from Shasta.  In normal years, they receive more than 800,000 acre feet from the Bureau. In dry years, they get 650,000 acre feet.

Visit Site
PrevPreviousDrought has desperate ranchers asking: “Can I feed tomorrow?”
NextAnother valley town on the brink of going dryNext